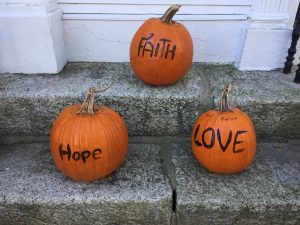 *Rev. Jared Hamilton (United Church of Christ) has served the United Church of Hinesburg since 2013.  Jared served as First Parish Church’s Youth Leader and led many Worship services here while earning his Master of Divinity from Andover Newton Theological Seminary, he was ordained at First Parish in November 2013. As pastor, Jared works in this vibrant faith community, advocating a faith of exploration, mutual support, inclusion, and works of justice. Ministering to a multi-generational community, Jared’s work includes youth group and coordinating yearly youth trips, communion education classes, adult faith formation groups, pastoral visitation, and leading a community worship. He has served as a chaplain at New England Baptist Hospital and on staff at Human & Civil Rights Organizations of America. He is a member of the Society of Biblical Literature and the Next Generation Leadership Initiative of the United Church of Christ. Jared gardens and keeps bees. He is married to Leah Hamilton and spends his down time with their three young children, Camille, Simon and Miles. Contact Rev Jared at .

**A native of Austria, Soprano Ute Gfrerer studied voice and acting in Los Angeles before she started her international career singing operas, operettas and concerts in theaters all over the world, like the Vienna Volksopera,  and the Zurich Opera, The Barbican Hall in London, The Megaron Theater in Athens, Alte Oper Frankfurt, Deutsches Theater Munich,  NHK Hall in Tokyo, The Virginia Opera, and the Salzburg Music Festival to name but a few. In the past decade she has become a specialist in the music of Kurt Weill, having sung and recorded many of his pieces. In 2018 Ute was asked to be the first person to sing and record a Weill song (The Song of the Blind Girl) that was lost since 1930 and then found in a library in Berlin 88 years later! Last year she was also the judge of the prestigious “Lotte Lenya Voice Competition” at the Eastman School of Music. Ute Gfrerer enjoys doing her own cabaret shows and collaborating with other artists, like visual artist Lisa Rosowsky which whom she created a very personal program around the topic of the Holocaust. www.forourfathers.com She coaches young singers in artistic expression and has given masterclasses at the Vienna conservatory, Stanford University, the University of Maryland and NEC. She was also nominated for an IRNE award as “Best Actress in a Musical” for her portrayal of Aldonza in the Musical “The Man of La Mancha”. Ute is also a certified hypnotherapist and astrologer. She lives on the Boston North Shore with her German husband Christoph, her 16 year old daughter Maxine and her singing dog Barolo.